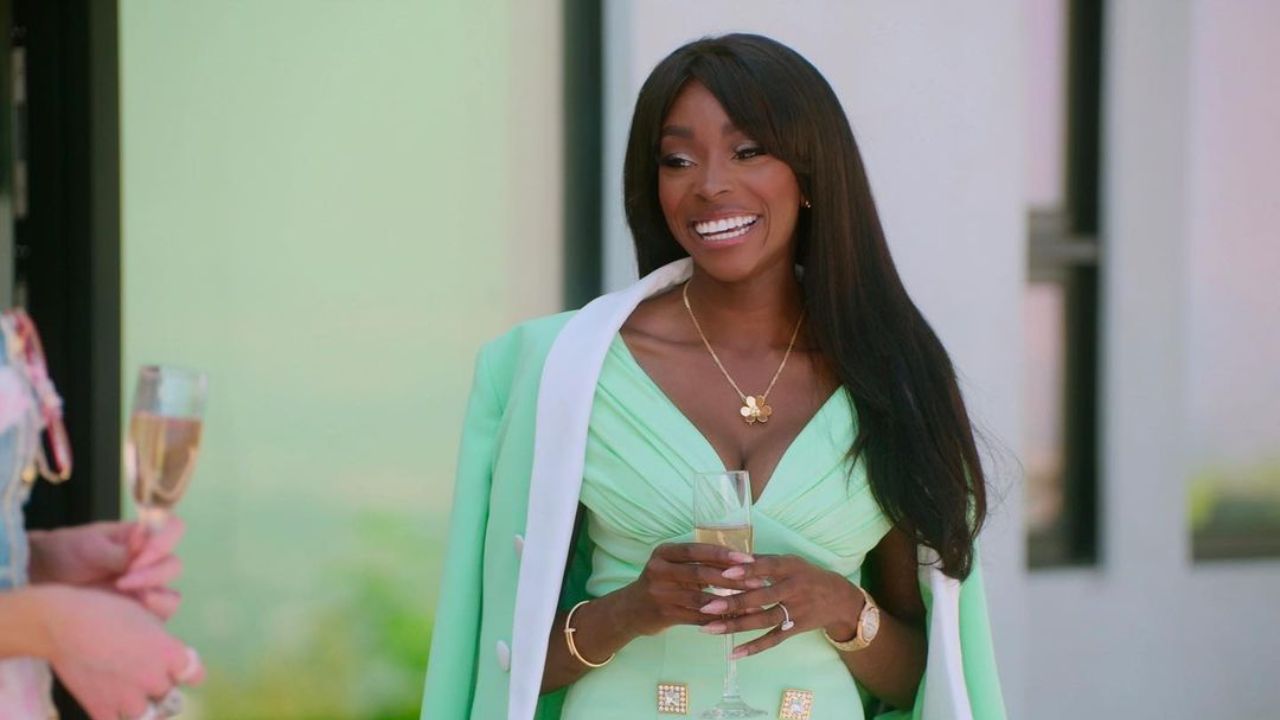 Chelsea Lazkani is the new black girl cast member on Netflix’s Selling Sunset Season 5. Chelsea is a British-Nigerian realtor who has worked in the real estate sector in Los Angeles for over 5 years and joined The Oppenheim Group in July 2021 after taking a break to have her children. The 29-year-old star is married to her husband Jeff Lazkani and the couple has two children together. As for her family, her mother is named Elizabeth Adefioye. Chelsea’s mom is an executive with the engineering company, Emerson. Some fans think Chelsea Lazkani’s fake accent sounds like an American faking an Australian. While her birthday is undisclosed, Chelsea from Selling Sunset is believed to boast a net worth of $3 million.

If you like reality shows, you’ve probably already binge-watched all five seasons of Netflix’s Selling Sunset, which follows the dramatic and glamorous lives of real estate brokers at the elite firm, The Oppenheim Group. Fans of Selling Sunset welcomed Emma Hernan and Vanessa Villela to the cast last summer, and it seems like it was only yesterday.

With the release of season 5 of Selling Sunset on Netflix on April 22, we have another new member of the Oppenheim Group to meet: Chelsea Lazkani, a British-Nigerian realtor who comes into the Selling universe in full glam.

With Brett Oppenheim leaving the Selling Sunset brokerage for pastures new, the newest realtor is a welcome addition to the team. Let’s have a look at who Chelsea really is.

Chelsea Lazkani is described as a wife, mother, and luxury realtor with five years of expertise on the Oppenheim Group website. Her father, a London-based architect and property developer, Segun Adefioye, is a real estate developer, and her mother, Elizabeth Adefioye, is an executive with the engineering company, Emerson.

Chelsea Lazkani obtained her real estate license in 2017, shortly after relocating to Los Angeles from London. Lazkani worked in the oil and gas industry as a business strategy and solar analyst before moving into real estate.

According to her LinkedIn, Lazkani worked for Rodeo Realty from 2017 to 2020 before joining Oppenheim in July 2021. Lazkani works with a wide range of clients, from first-time buyers to developers. In terms of her new coworkers, the realtor told People that she had no prior connections to the group before joining the show, but that she’s become friends with Christine and Emma since then.

This decision has already shown to be a success. Her first-year sales were above $10 million, according to the Oppenheim Group. In terms of her personal life, Chelsea Lazkani has been married to her husband Jeff Lazkani since 2017, and they have two children, Maddox and Melia.

Jeff is a managing partner at Icon Media Direct, a marketing and advertising company, and he was the one who connected Chelsea to Jason Oppenheim when she first began her real estate career. Chelsea Lazkani took a break from the field to have her children before returning to the industry last year.

The 29-year-old star expressed her delight about joining the cast of Selling Sunset on Instagram in March 2022. Lazkani gave an interview to People in the run-up to her Season 5 debut on Selling Sunset, in which she expressed her hope that her inclusion on the Netflix show will inspire other Black women, who are underrepresented in American real estate. She stated,

I saw this as an opportunity to really open doors in an industry that has lacked diversity and where minorities are underrated…This was kind of my time to give back and to educate and really mentor and push forward Black women in this luxury sector in real estate. So just knowing that I’ve got a greater purpose kind of prepared me for this.

A quick glance through Chelsea Lazkani’s Instagram profile (@chelsealazkani) reveals a jet-setting wife and mother, with pictures from many tropical destinations and the occasional ski vacation.

She also enjoys photographing her gorgeous children, whether at home or when on vacation. Her new castmates may make an appearance now that she’s marketing the show, even if there aren’t any postings with friends yet.

Meanwhile, Chelsea Lazkani’s net worth is believed to be $3 million in 2022. Following the Season 5 premiere, many fans can’t help but feel she’s using a fake accent on Selling Sunset.