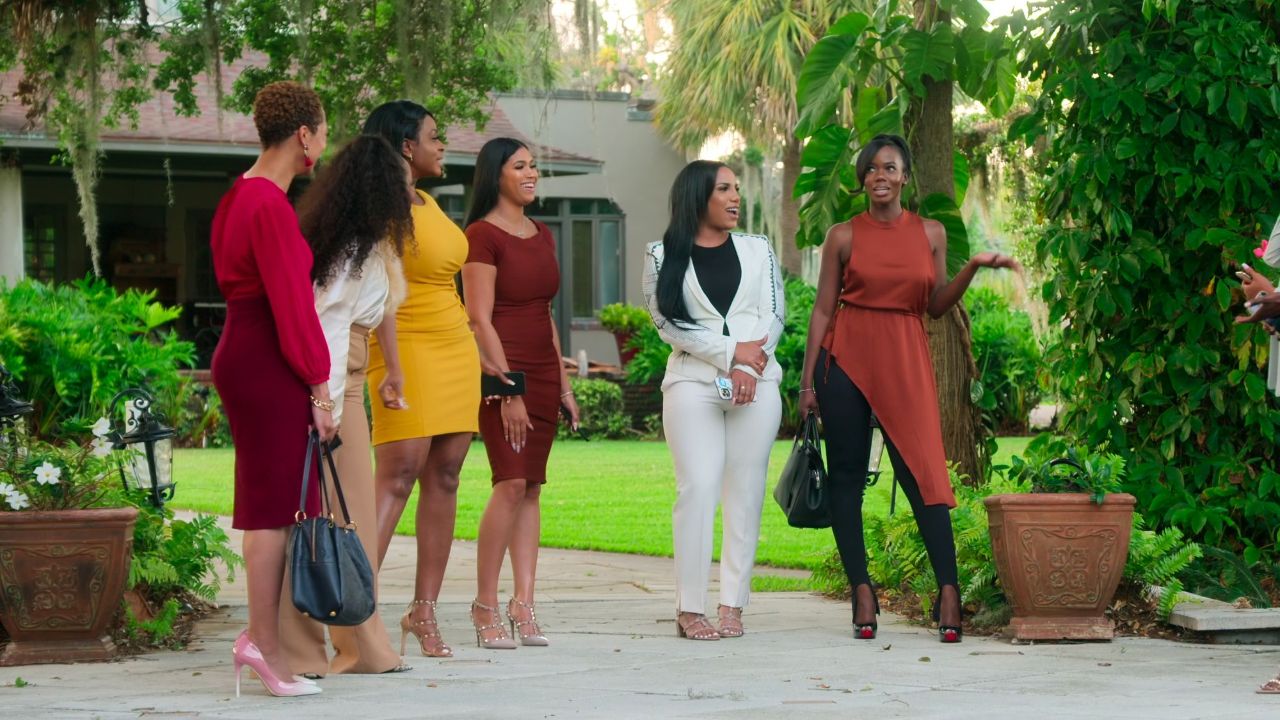 Netflix’s new reality show, Selling Tampa has been trending after the official trailer was released on 30th November. Altogether in the Netflix reality real estate show, Selling Tampa, there are exactly eight cast members. All the castmates are of different ages, however, they all are Black women realtors who were working at Allure Realty. Now, featuring in Netflix, no doubt, these casts have received the maximum possible attention.

Bringing a totally unexpected reality show, Netflix has developed perplexity on everyone’s minds and caught the attention. The new show, Selling Tampa‘s official trailer was released on 30th November 2021 while the show was made official on 15th December.

Just after Netflix made the trailer public, the unscripted show started receiving fame and thus, brought many viewers.

While many of us might be thinking about what Selling Tampa could be, therefore, to be specific, it is a show where real estate agents (all Black women) are cast on the show with the purpose of mixing their businesses. Hence, we can say that Selling Tampa is totally related to money-making and real estate.

Gaining huge attention from the public, Netflix’s Selling Tampa has been a hot topic and many people are curious to know the cast members. In this particular season of Selling Tampa, there are altogether eight cast members and all the members are Black women realtors.

Let’s get to know detailed information about each cast member; talking about their career to their ages.

The 40-year-old American realtor, Rena Frazier has been involved in real estate for a long duration. To be specific, Frazier received the real estate license in 2018, and just after a year of getting the license, Rena worked at Allure Realty in 2019.

Nevertheless, earlier, the cast worked as an attorney at a law firm, and maybe she was unsatisfied with her work, and therefore, dropped out and involved herself in real estate. It seems that real estate acted as a positive catalyst and therefore, Frazier got the opportunity to be one of the cast members in the Netflix show, Selling Tampa.

Fraizer graduated from the University of South Florida with a degree in Civil and Environmental Engineering and later, graduated from Stetson University with a law degree. Also, Rena Frazier is married. So, staying away from her is the best option, or else her husband Anddrikk Frazier might take action against you.

Featuring in the compelling Netflix show, Selling Tampa, Alexis Williams has received more fame than ever. The realtor, Alexis is someone who will take every stern initiative for advocating her commission.

While working at Allure Realty, Alexis Williams has given her best and has stood out to be one of the exceptional real estate agents. It has been claimed that Selling Tampa’s cast, Alexis first got fascinated with real estate when she herself had an experience with her agent for a rental property.

Williams would not have made it to be one of the cast members in the prominent Netflix show, Selling Tampa if she had met Sharelle Rosado. The story is quite hilarious; while Alexis was getting her lashes extension at a salon, she eavesdropped and heard a lady talk about opening a brokerage.

As soon as Williams heard about it, she immediately asked the lady to wait until she opened her eyes. Once, Alexis got her lashes done, she got to know that the lady was Sharelle Rosado, and therefore, that’s how Alexis involved herself in real estate.

Through her brokerage itself, today, the realtors of the firm are getting the opportunity to receive fame from Netflix viewers.

Being one of the cast members of Selling Tampa, Sharelle Rosado’s appearance in the show will act as a benediction to her and bring her maximum exposure. Moreover, the American woman, Sharelle has exactly 5 years of experience as a broker and involvement in real estate.

No doubt, the cast member, Sharelle is an outstanding real estate agent and is extremely wealthy. However, due to her discretion in her personal life, not much is known about her.

Due to her lowkey nature, it is daunting to know her age, however, looking at her physical appearance, it seems that Reeves is probably in her mid-twenties.

Before her involvement in the real estate, the cast member, Colony worked as a teacher to preschoolers, conversely, she realized that the job was not for her. To that point, she quit the job and became one of the realtors.

Being an American realtor and working as an office manager in Allure Realty, Juawana Colbert Williams is one of the successful real estate agents. Moreover, her dedication and hard work have paid off, and thus, she is starring as a cast member in Netflix’s new trending reality show, Selling Tampa.

The realtor, Juawana was born on 24th December 1980, and currently, she is 41. It has been claimed that Juawana developed a strong passion for real estate from her grandfather as he was the owner of many apartment units.

Talking about Juawana’s educational qualifications, she graduated from Northwood University and holds a degree in finance marketing, and real estate.

Moreover, she previously worked as an executive in the economic development industry and helped grow the real estate industry in Los Angeles, CA.

Accompanying the other seven casts, Tennille Moore is one of the participants in the trending Netflix reality show, Selling Tampa. Although Tennille’s participation in Selling Tampa is yet to be seen, we assume that the American realtor will quintessentially have a lot to offer.

Moore commenced working as a real estate agent in Allure Realty in 2019, and thus, Allure Realty brought a turning point in her life. Hence, featuring as one of the casts in the Netflix show, Selling Tampa, no doubt, Tennille will receive wide recognition from the public.

Tennille Moore graduated with a degree in early childhood education and teaching from State College of Florida Manatee-Sarasota. Before working as a realtor, the Selling Tampa cast, Tennille Moore was a Chief Legislative Assistant in the Florida Senate.

From trading snacks at a young age to becoming one of the successful realtors, Selling Tampa‘s cast, Karla Giorgia has made her single mother’s investment all worth it.

Previously, the Netflix cast, Karla Giorgio began her career in 2015 when she worked under the wings of eXp Realty. As it is said, everything for a reason, in 2019, Karla left the job for good, and thus, she joined Allure Realty. Tables had turned around in the blink of an eye, and the Netflix Selling Tampa’s cast, Karla became one of the best realtors.

The Selling Tampa’s cast member, Karla holds a Bachelor’s degree in Business from Valencia College in 2008.

Anne-Sophie is not a native American, she migrated to the United States in 2005. In spite of struggling with the language, the Netflix cast, Anne-Sophie gave her best and tried every possible way.

Petit was one of the top students in her high school years, and she graduated from the University of South Florida in 2016 with a degree in Accounting. While working as an accountant at a company, Anne-Sophie got promoted to a property accountant position.

Therefore, she commenced working for a real estate firm. Hence, as of now, her involvement in real estate has given her the best opportunity in casting in one of the best reality Netflix shows, Selling Tampa.