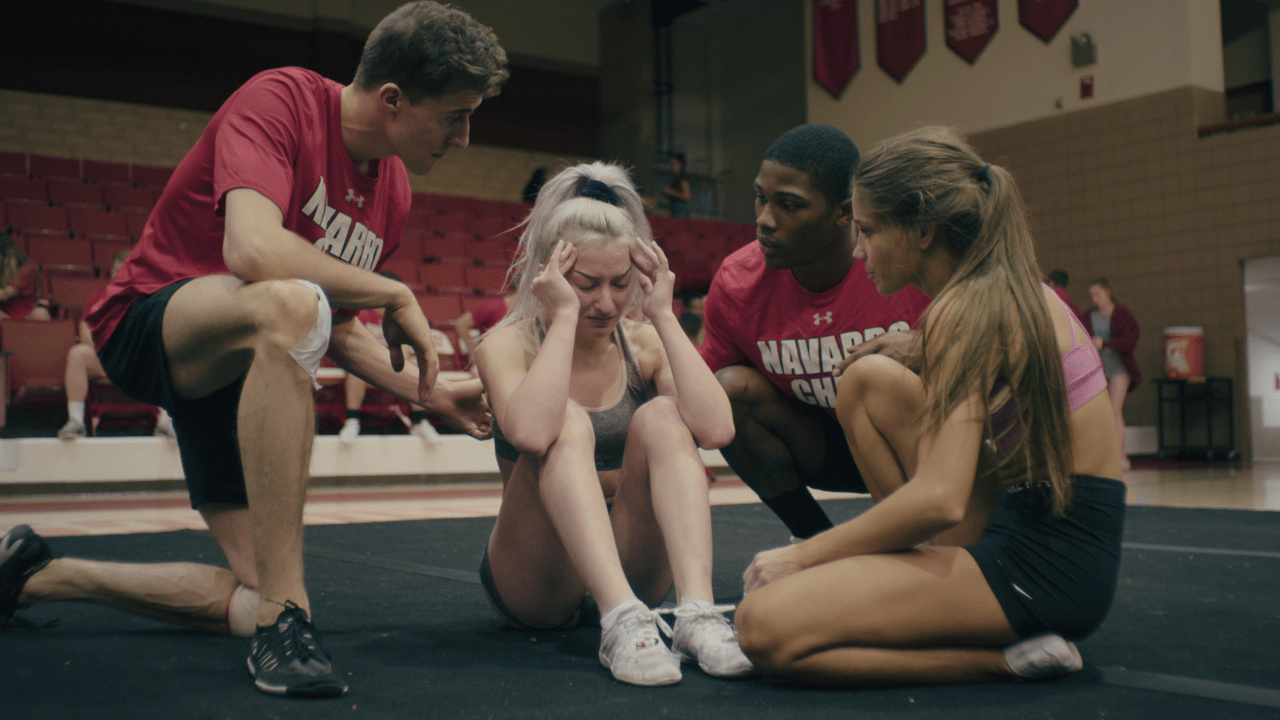 Emmy-winning docuseries Cheer catapulted Navarro Bulldogs into fame and lots of love from the audience. Fans are eager to know what’s in store for Season 2 in the lights of some horrific events that have transpired post the first season. The show will not follow just Navarro for its second installment, but the rival team too.

The Netflix show is an American sport television docuseries that follows the journey of Navarro College’s Bulldogs Cheer Team on their way toward competing at the annual National Cheerleading Championship in six episodes. It was released in January 2020. The second season is set to be released today. Let’s know more about the cast.

Previously, we discussed when the second season was filmed, a potential Season 3, what happened to Assistant Coach Andy, and who wins Daytona 2021.

Season 2 of Cheer will document Navarro Bulldogs adjusting to the fame brought by the debut season and how they tackle one of their teammate’s arrests. There will be a few additions to the team. This season will also explore the equation of the team with their fiercest rival at Trinity Valley Community College in Athens, Texas. There’s going to be a lot of new casts.

Monica Aldama is a popular cheerleading coach. She became a prominent figure after Cheer aired as the coach of the co-ed cheerleading team at Navarro College. The sports docuseries focuses on her mentorship as she guides Navarro on the team’s goal of winning the national championship at Daytona Beach, Florida.

She partnered with Val Chmerkovskiy for the 29th season of Dancing with the Stars. She got eliminated on the 7th week, placing 10th.

Monica was born on February 7, 1972, in Corsicana, Texas, America. She did her schooling at Corsicana High School and attended Tyler Junior College where she joined the cheerleading squad. She did her Bachelors in Business Administration at McCombs School of Business. She later went on to earn a Masters of Business Administration degree from the University of Texas at Tyler.

She is married to Chris Aldama with two children; a daughter Kristian Alexandra and a son Austin Aldama.

Gabriella “Gabi” Butler is an American cheerleader, YouTuber, and television personality. She was born on January 16, 1998. She has been competitive cheerleading since the age of 8. She has been on the California All-Stars team Smoed during which she even made a regular appearance on AwesomenessTV’s YouTube series Cheerleaders for a couple of seasons.

With Smoed, she has been a part of the cheerleading world championships twice, in 2013 and 2014. She has also been on other teams like Top Gun TGLC, Cheer Athletics Wildcats, and Gymtyme Blink. Currently, she attends Weber State University in Ogden, Utah, where she is a member of the team.

Morgan Simianer stood out among fans with her personality and because of her terrible childhood. She is from Loveland, Colorado. She was abandoned with her brother to live in a trailer by her biological parents when she was a sophomore in high school.

She was all alone after her brother Wyatt left in search of their mother after he turned 18. After her grandparents came to know about her condition, they took her in 2014.

In 2017, her grandfather brought her down to Texas to try out for Navarro College’s elite competitive team and the rest is history.

Lexis “Lexi” Marie Brumback was born on January 11, 2000, in Houston, Texas. She possesses elite tumbling skills. She dropped out of Clear Creek High School at age 16. She began cheerleading since she was six.

She trained at Houston-area Infinity All-Stars Gym for nearly 10 years and went on to land a scholarship offer from Aldama to attend Navarro College and join its elite coed cheer squad.

In the finale of Cheer, she was kicked off the team after she was caught in a car with illegal substances. But fortunately for her, she was given a second chance and since has rejoined the team.

La’Darius Marshall was born on May 9, 1998, in Fort Walton Beach, Florida. Prior to Cheer, a video of him went viral on the Internet where he was cheering his teammates.

He considered a potential future career path personal training, choreographing, or enlisting in the United States Army or Air Force as he was a senior in a two-year college in Season 1 expecting to move on from the team and there is limited opportunity for cheerleading post-college.

But he went on to stay in the team for another year following the cancellation of 2020’s Daytona championship. Being a survivor of sexual abuse himself, he was gutted when his teammate Jerry Harris was arrested on a charge of producing child pornography.

Jerry Harris was born in Hinsdale, Illinois on July 14, 1999. He graduated from Waubonsie Valley High School and attended Navarro College where he became a member of the cheer team.

In the final episode of the reality show, he was honored with a Regional Scholars Award from the University of Louisville.

In a shocking turn of events, on September 17, 2020, the Netflix star was charged in federal court in Chicago for the production of child pornography and arrested by the FBI.

Maddy Braum joined Navarro Bulldogs in 2019 hoping to compete for Daytona in 2020. The pandemic ruined her plans. She earned a spot as the top flyer in Daytona for the 2021 semester.

She has cheered for the Cheer Athletics (CA) Wildcats and coached at East Celebrity Elite Gym in Tewksbury, Massachusetts.

Maddy’s dad George Brum was in prison for rape!

Gillian Rupert joined Navarro Bulldogs at the same time as Brum. While initially, she seemed like a rookie she held her own on the mat.

Apart from Navarro, she has cheered for the CA Wildcats, where she helped them win at Worlds in 2019.

Cassadee Dunlap is a cheerleader and a rookie tumbler. She is a former child pageant star who appeared on Cheer Perfection and Toddlers & Tiaras.

She spoke of her pageant past that it was an experience that taught her to smile through the pain. She cheers for the Bears.

Brooke Morosca is one of the most talented flyers at Navarro. She served as an alternate in Navarro’s 2019 championship team.

She has cheered for Cheer Athletics and Next Level Cheerleading.

Payton Sykes is a joy to watch at Navarro’s Daytona 2020 and 2021 routines. Apart from Navarro Bulldogs, he has cheered for Cheer Athletics and Woodlands Elite Cheer Company, winning Bronze and Silver at the world championships.

Vontae Johnson is the head coach of Trinity Valley Community College cheerleading team The Cardinals. He was once a cheerleader at TVC himself and now he has been coaching for three years. He has also cheered for Team USA Coed and Cheer Athletics Claw6.

Khris Franklin was the head coach at Trinity Valley Community College when Vontae Johnson was a cheerleader at The Cardinals. Now he assists his former protege in mentoring a new batch of cheerleaders.

Jada Wooten is one of the valuable cheerleaders at Trinity Valley Community College, Navarro’s rival. A tumbler and a flyer, she is one of the strongest leaders on the team in Daytona 2021.

She has previously cheered for Cheer Athletics and is a 2015 World Champion and three times Bronze Worlds Medalist.

Jeron Hazelwood is a stunter and tumbler at TVCC. He missed out on competing in 2020 because of the ongoing pandemic and in 2021 because he was graduated from college.

He is seen cheering on his former teammate even when he is not a part of the team. He has cheered for Gymtyme Chrome and Cheer Athletics.

DeVonte ‘Dee’ Joseph is gifted with such extraordinary tumbling skills and talent that he can do a “quint”- a flip with five turns that’s not allowed at Daytona because of its difficulty level.

He learned cheerleading at Georgia’s Flip City South and also from his brother. Khris Franklin is seen describing him as the most talented kid in America.

Angel Rice is TVCC’s greatest tumbling star. Her teammates describe her as  “Simone Biles” of Cheerleading.

Cheer Season 2 is streaming on Netflix.

Does Tate Walker Die in Where the Crawdads Sing? Does He Survive in the Book or a Movie? Read More