What Is the Liquid in the Floor Is Lava? Season 2 Netflix Update! 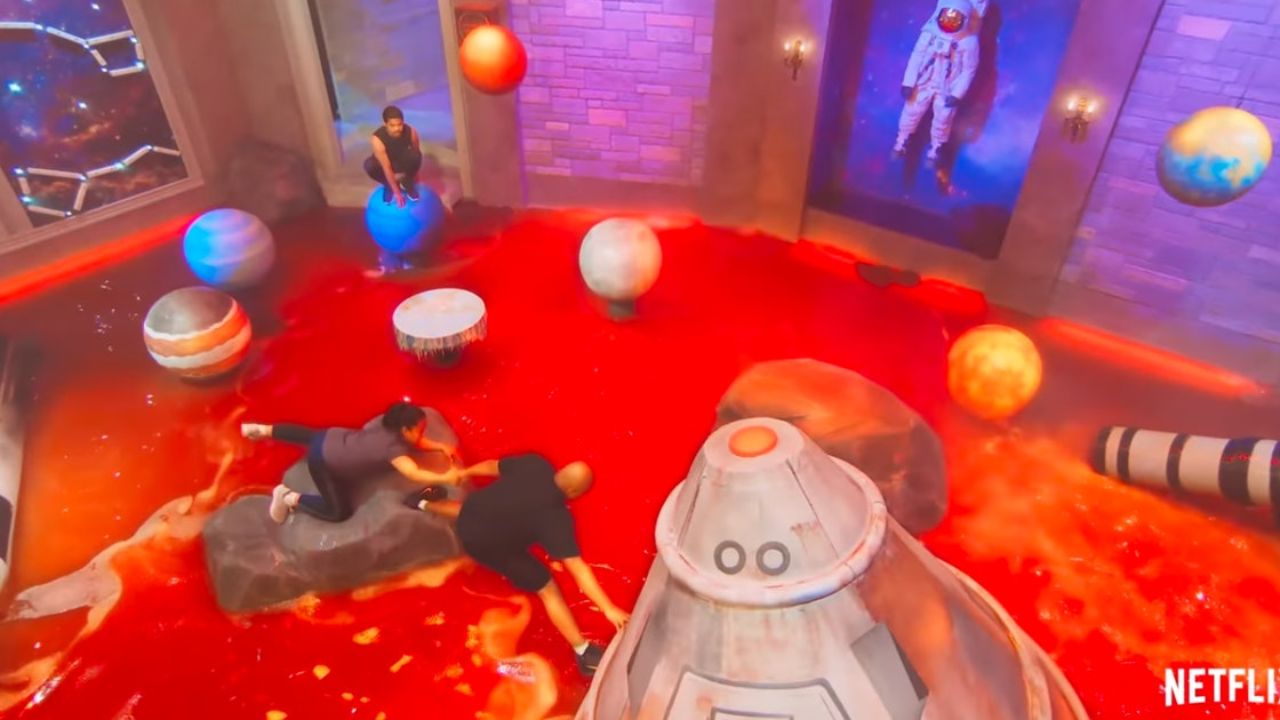 Season 2 of Netflix's Floor is Lava has just premiered, and viewers are curious as to what the liquid in the floor is because participants die after falling into it. While it's no longer a mystery that the bright-red hot lava is water-like slime that has been meticulously colored the terrifying color, its exact depth is still unknown. Go through the article to learn more about the liquid on Floor Is Lava.

Floor Is Lava, Netflix's newest reality game show series, is a mash-up of all of these things. Its concept is plain and uncomplicated. Each obstacle course level is located in one of the house's rooms, such as the basement or the dining room, and each team must negotiate these rooms by conversing with one another, jumping from one object to another, and swinging wildly from bars and nets to avoid getting wet.

Rutledge Wood hosts the binge-worthy show, which involves three-person teams battling in the traditional childhood game, but with considerably larger stakes. Whichever team has the most players and crosses the finish line first wins.

If a participant gets wet and falls into the lava, they will be eliminated. The rest of their team has to finish the level on their own, trying to avenge them while avoiding the same fate. Because they will vanish if they slip and fall into the lava.

Since season 2 aired on Netflix, fans have asked major questions: what is the liquid on the show floor is lava? Here are all the answers to your questions!

What Is the Liquid in the Floor Is Lava?

One of the most recent Netflix original series to go viral on social media is Floor is Lava. It's an obstacle course competition like you've seen before, but it has a twist that distinguishes it from other shows. So what is the liquid on the floor?

When a contestant falls off the course, he or she does not just fall to the ground or into the water. Instead, each loser falls into lava or what appears to be lava. It looks like lava, but it's not genuine because the contestants wouldn't enjoy it.

Netflix's renowned obstacle-course game show, Floor is Lava, recently returned with season 2, and the lava is more mysterious than ever. The floor is Lava Season 2 promises to be full of more twists, turns, and, of course, lava, as viewers couldn't get enough of the show's epic molten deaths in season 1.

On June 19, 2020, Netflix released the show. In each episode, teams compete against one another to get as many members of their squad to the exit as possible. The winning team is the one with the most competitors who finish the course and gets the chance to meet the host Rutledge Wood (@rutledgewood). So, what's in the lava, exactly?

Irad Eyal, Floor is la ava producer and co-owner of Haymaker Media is responsible for the majority of what is known about the lava. He stated to Fast Company,

I can't tell you what's in it, but our showrunner Anthony Carbone used to joke that the closest thing to it is Panda Express orange sauce.

Moreover, even though the lava is their secret sauce, the contestants are always safe, even if they have to be around or inside it for long periods, according to series creator Irad Eyal.

Irad, on the other hand, did not pick up the lava from the fast-food joint. He claims that the lava is made by Hollywood's number-one slime production lab, which developed the exclusive lava combination. The floor is Lava's production team ordered approximately 100,000 gallons of slime, more than any other show in history.

This sauce contains water, modified food starch, and xanthan gum, all of which could be components of the floor's lava gunge. However, unless the show's creators want to deal with a sticky, stinky set, the lava is unlikely to incorporate substances like soy sauce and sugar.

Lava is a semi-liquid rock that may reach temperatures of over 2,000 degrees Fahrenheit. Because of the danger, it poses to the contestants, fans will never see real lava on the show, but the slime lava seen on the show is dyed red to mimic the color of real lava.

The show's lava bubbling gives it an authentic lava-like appearance. As shown in the video, bubbling is achieved through production and wind effects. The only threat a Floor is Lava participant confronts is a damaged ego if they tumble into the lava.

While it's no longer a mystery that the bright-red lava isn't lava but rather a warm, water-like slime that has been meticulously colored the terrifying color, its exact depth is still unknown. just like how the participants depart after they've completed their DIY project.