How Deep Is The Lava in the Floor Is Lava? Depth of Water Revealed! 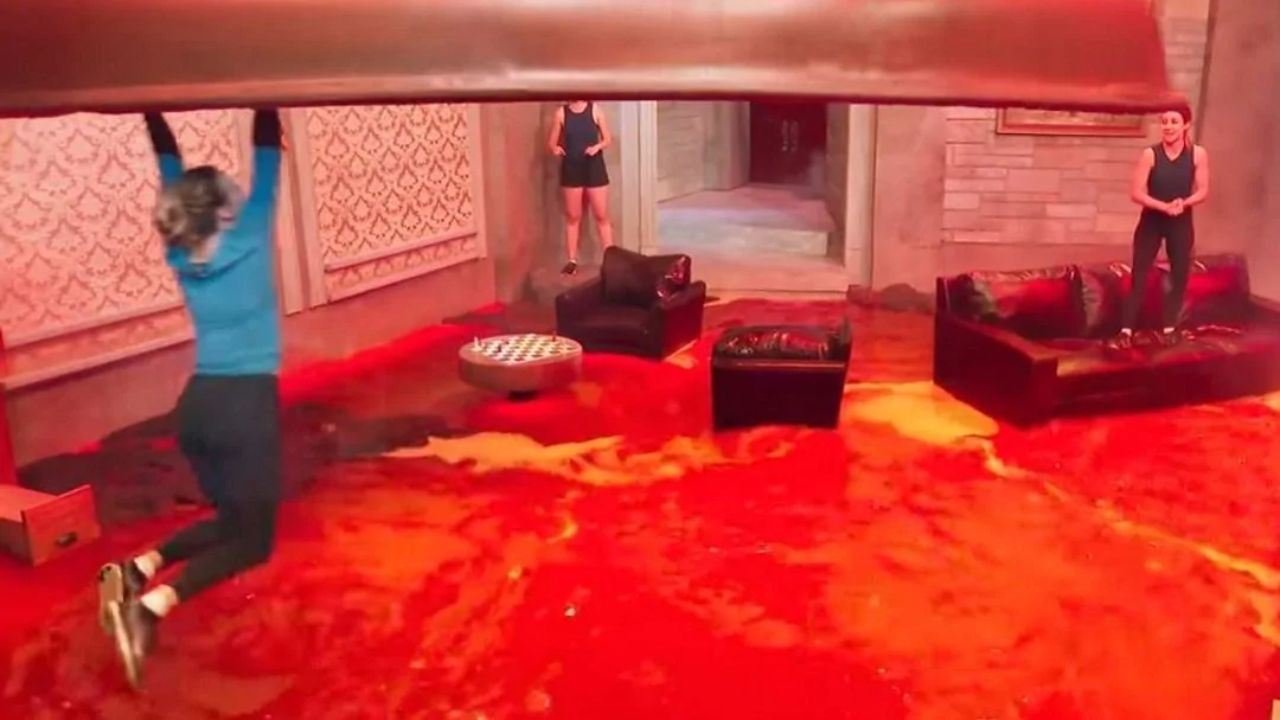 In the Netflix show, Floor is Lava, fans wonder how deep the lava is on the floor. When a player loses and falls into the lava/water, they vanish, leaving the rest of their squad stunned. Go through the article to know more about how deep the lava is and what happens when they fall into the water.

Floor Is Lava, one of Netflix's most surprising reality game series, is back for a season 2, with more obstacles, higher stakes, and even hotter lava. The game puts three-person teams against one another in an attempt to complete several obstacle courses without falling into the red, boiling lava.

If a contestant gets wet and falls into the lava, they will be eliminated. The rest of their team would have to finish the level on their own, trying to avenge them while avoiding the same fate. Because they will vanish if they slip and fall into the lava.

As shown in the show, many of the candidates have 'died' as a result of falling into the lava on the floor. So, where do they go, how deep is the lava, and what happens when they fall? Here's all the information you need!

Previously, we touched on the Virzi triplets and Rutledge Wood.

How Deep Is the Lava in the Floor Is Lava and What Happens When They Fall?

Floor Is Lava, the newest Netflix game show, is pretty much what it sounds like: a televised version of that free game we all played as kids when we assumed the ground was lava and tried to avoid falling in by hopping, skipping, and jumping on anything we could.

Many of the candidates have 'died' as a result of falling into the lava on the floor. But we can only guess where they go and what they've gotten themselves into! Unfortunately, there are no definitive answers as to how deep the water, or lava, is, but that doesn't stop us from guessing!

While it's no longer a secret that the bright-red lava isn't real lava obviously but rather a warm, water-like slime that's been expertly colored the frightening hue, its exact depth is still unknown. It appears that this, like where the contestants vanish after slipping into the lava, is top-secret knowledge only producers/teams have, but we have been able to hypothesize.

We know for a fact that the obstacle course chambers are filled with roughly 80,000 gallons of lava and that every player who slips makes a huge splash, so it's obvious that it's rather deep. In other words, given the way the slime submerses the contestants regardless of their shape, size, or angle of entry, it's logical to assume it travels far further than 3 or 4 feet.

We did note, however, that once a contender falls in, the film turns to their teammates screaming in terror and shows us a replay of what happened again and over. This cut indicates that a significant amount of film has been chopped, and we believe that the portion where the contestant emerges from the lava and exits the course is the section that we don't get to witness.

Moreover, even though the lava is their secret sauce, the contestants were always safe, even if they had to stay around or inside it for long periods, according to series creator Irad Eyal. Safety was prioritized throughout the process, whether during the manufacturing of the substance or the testing runs, implying that it couldn't be too deep to scare away any cast members.

As shown in the video, when you see a participant fall into the water on the show, it makes quite a splash. Unfortunately, many candidates fall into the lava despite their best curtain-hanging and chandelier-swinging efforts. And the show makes it appear as if they are genuinely lost under the lava, never to be found.

The players are presumably transferred to another room after their fall, where they can watch the rest of the program from the sidelines, rooting for their team to win the $10,000 grand prize and meet the host Rutledge Wood (@rutledgewood).