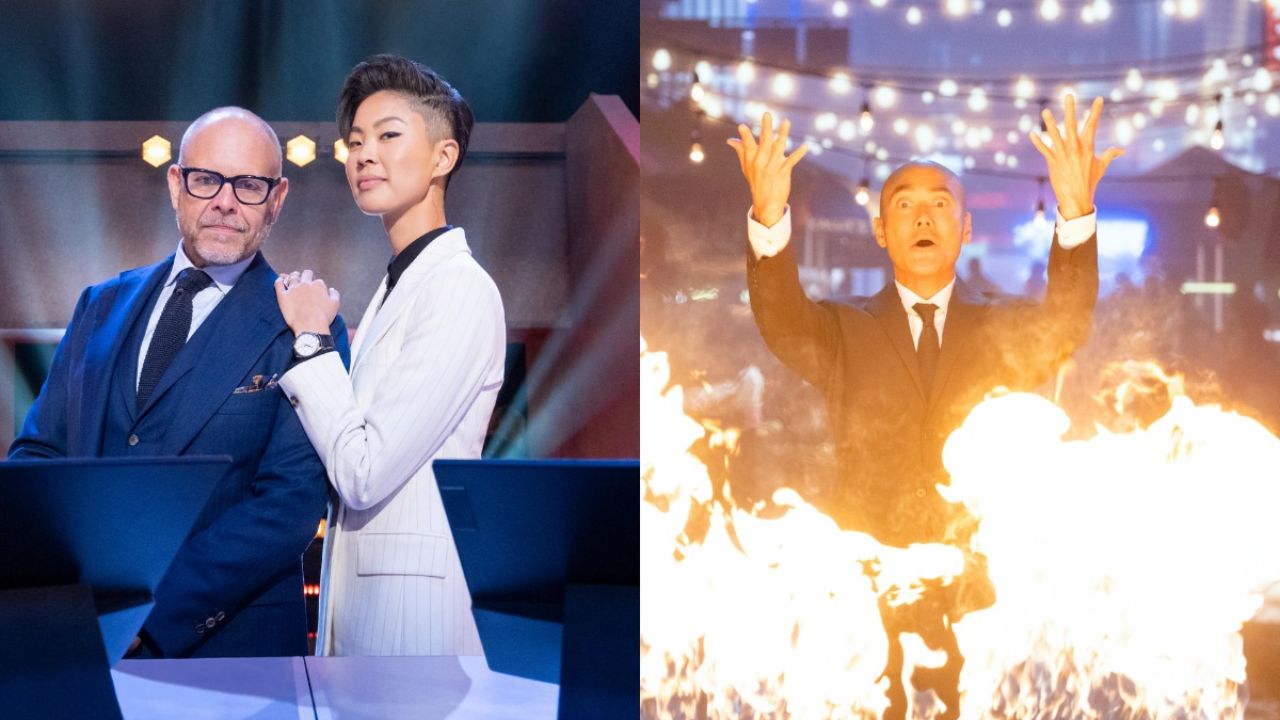 Alton Brown and Kristen Kish are the hosts of this new America edition of Iron Chef: Quest for an Iron Legend on Netflix in 2022, while Mark Dacascos will resume his role as The Chairman. Fans wonder about the female host and Mark Dacascos’s uncle. Go through the article to learn more about each host of Iron Chef.

Iron Chef America, which dominated the Food Network for more than a dozen seasons, is now available on Netflix. Iron Chef: Quest for an Iron Legend has released an eight-episode inaugural season, which was shot in a new Los Angeles kitchen stadium and features familiar elements. The Netflix show’s top Iron Chefs compete against each other in timed cooking competitions using a mystery ingredient given by The Chairman with actor Mark Dacascos reprising the role.

Iron Chef, the legendary food competition that returned this week after a four-year sabbatical, has several distinguishing characteristics. Every episode of Iron Chef showcases real chefs preparing real cuisine. These chefs are also characters in a fictional story, which is narrated by a pivotal figure.

As the show Iron Chef: Quest for an Iron Legend premieres on June 15, 2022, viewers are eagerly waiting to learn about the show host. Here’s what we know so far!

The Iron Chef returns to Netflix this week in its current version. The new Iron Chef, entitled Quest for an Iron Legend, makes the necessary changes to keep up with the times and its new location.

Alton Brown (@altonbrown) will return to host the show Iron Chef: Quest for an Iron Legend on the streaming site, with Top Chef winner Kristen Kish (@kristenlkish), while Mark Dacascos will resume his role as The Chairman. Kristen joins Brown as a co-host, demonstrating her competitive experience and interviewing the chefs live on camera throughout the frantic preparation.

If you don’t know who Alton is, he was the first host of Iron Chef America on the Food Network. The rights to a new Iron Chef show, named Iron Chef: Quest for an Iron Legend, were then acquired by Netflix.

Alton Brown is a television personality, chef, author, actor, cinematographer, and musician from the United States. He is one of the most popular celebrity chefs on the Food Network, but he just decided to leave the network to host a show on Netflix. Feasting on Asphalt, Brown’s third series delves into the history of dining on the go. In a four-part miniseries about the history of road cuisine, Brown and his team traveled throughout the United States on motorcycles.

Fans have been drooling after seeing Kristen Kish, the show’s host and chef, in the new series. Kristine is an American chef who was born in Korea and won the tenth season of Top Chef. Chef and reality television star, Kristen, has amassed a sizable following throughout the years. The South Korean became the competition’s first female winner.

Kristen has had a big fan base since her days on Top Chef, thanks to her captivating and upbeat demeanor. Previously, she worked as the chef de cuisine at Menton in Boston’s Fort Point neighborhood. She is the host of Travel Channel’s 36 Hours and a co-host of Food Network’s Fast Foodies.

Kish became a culinary demonstration kitchen instructor at Stir in Boston, Massachusetts. In 2012, Stir’s owner, Barbara Lynch, promoted Kish to chef de cuisine. Kristen Kish Cooking: Recipes and Techniques was published in 2017, and she co-authored it with Meredith Erickson. In May 2018, Kish took over as chef at Arlo Grey, her new restaurant in Austin, Texas.

Both the host and the guest of honor hit it off right away. It could have gone in a variety of directions. Fortunately, when they arrived for rehearsals on the first day, they discovered they were the right team for the job.
Iron Chef: Quest for an Iron Legend will consist of eight 45-minute episodes based on the world-famous Fuji Television Network concept.

Before you leave, check out Kristen’s tattoos.