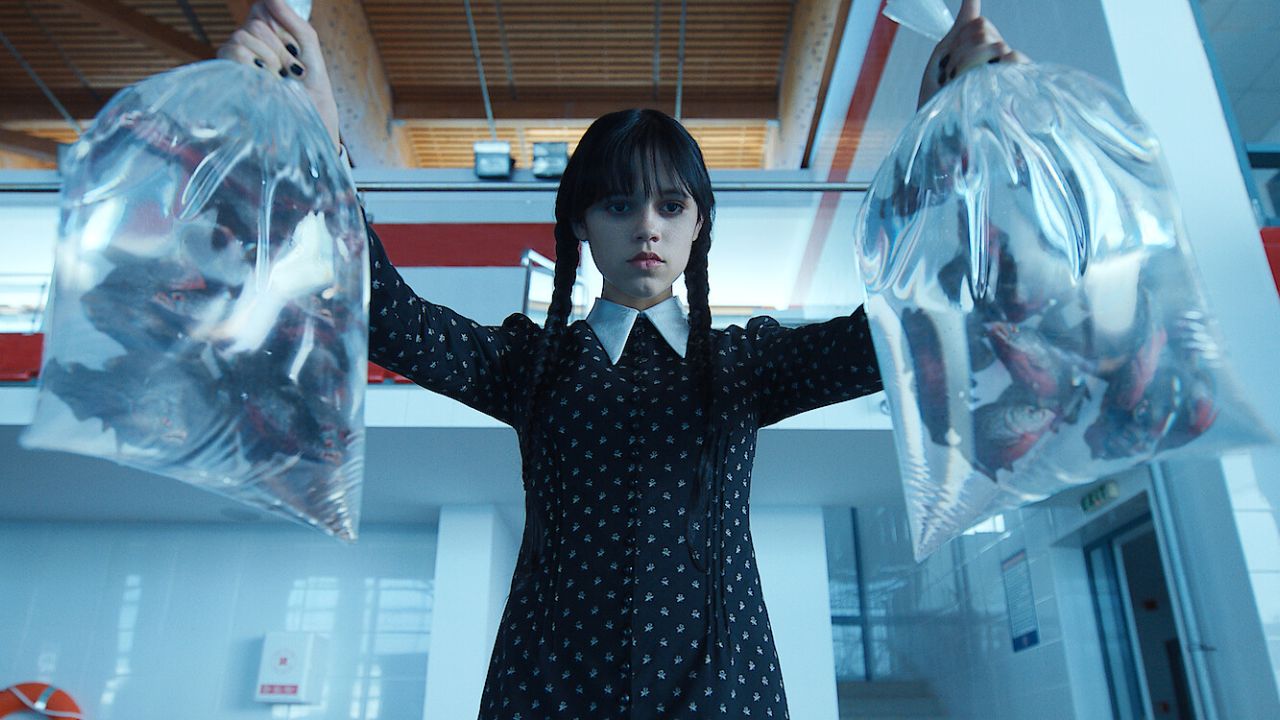 Wednesday Addams, the leading character in Netflix’s Wednesday, is 16 years old as of 2022. Yes, she is finally in her teenage years. On the other hand, Wednesday actress, Jenna Ortega, is 20 years old in real life. Additionally, there’s a good chance of seeing an adult version of her if the viewers adore the show.

Wednesday on Netflix is a coming-of-age story with a spooky twist, and it is based on the title character from Charles Addams‘ well-known cartoon, The Addams Family. Tim Burton, Alfred Gough, and Miles Millar‘s spooky horror-comedy series center on Wednesday Addams (Jenna Ortega), a strange teen with a taste for all things gothic.

She enrolls in Nevermore Academy to strengthen her psychic abilities, meets a variety of new classmates, and works to solve a string of paranormal murders that have been plaguing the town of Jericho at the same time. Wednesday explores the mysterious pasts of her parents, Morticia and Gomez, and uncovers some surprising secrets as she attempts to make sense of all the changes going on around her.

The iconic family is brought back to life by a skilled cast and crew, and rising scream queen Jenna Ortega may be the ideal fit to play the titular daughter of Gomez and Morticia. Her character in the show, according to many critics, fits very well. Apart from that, many viewers of the show wonder how old the character is in 2022. Well, here is what we know.

Additionally, know who the monster and Ms. Thornhill are in the Netflix show.

As of 2022, Wednesday Addams is 16 years old in the Netflix series. On the other hand, Jenna Ortega (@jennaortega) (the actress who plays the role of Wednesday) is 20 years old. Wednesday is convincing as a student who is hesitantly making her way through her first year at Nevermore, an academy that both of her parents attended and where they first met and fell in love, despite being quite a few years older than her character.

Wednesday, who tells her roommate Enid Sinclair (Emma Myers) that her parents only brought her there because they want her to follow in their footsteps, doesn’t plan to remain long despite Gomez and Morticia (Luis Guzman and Catherine Zeta-Jones) being anxious to get their daughter into the school.

Looking back at Wednesday’s earlier iterations, she was just six in the original TV series, but in the 1991 and 1993 films The Addams Family and Addams Family Values, she is around 12 or 13 years old. In both major motion pictures, Christina Ricci played the role of her. When addressing the iconic part, Ortega said:

All generations see themselves in Wednesday and want to be Wednesday, but we’ve never spent so much time with her before, and putting an emotional arc to a character that essentially has no emotion was really interesting. It was an interesting balance. We’ve also never seen her as a teenager before. So, that was a cool little endeavor. It came around very light-heartedly. I had a 10-, maybe 20-minute conversation with Tim. I read a couple of scenes for him.

In Tim Burton‘s version, Wednesday Addams is once more shown as the Addams family’s elder sibling, though it’s unclear how old her brother Pugsley is. The first eight episodes of Wednesday appear to be setting up a multi-season narrative, which would presumably follow the character at least until she graduates from Nevermore Academy because Wednesday wasn’t ordered as a miniseries. If The Addams Family TV series remains popular on Netflix for a long time, Wednesday might finally get to see the character in a significant adaption as an adult.

Wednesday Season 2: Has the Netflix Show Been Renewed?

We simply don’t know yet, which is true of pretty much every Netflix original series. There is nothing unusual going on here because Netflix rarely renews new series before they even premiere. With — SPOILERS — Tyler‘s Hyde side coming out to play and Wednesday Addams suddenly having a stalker who knows her brand-new phone number, Season 1 certainly leaves plenty of room for a Season 2.

According to Decider, it appears very likely that Wednesday’s writers at least want to return for more as they left room open for other stories to be told. Therefore, if you want to watch additional episodes of Wednesday on Netflix, you should watch Season 1 in its entirety as soon as you can and then get all of your friends to do the same.

Season 1’s filming lasted about six and a half months. Additionally, the show spent about 8 months in post-production before it was released on Netflix. So, if everything went according to plan and Netflix immediately announced a second season, Season 2 most likely wouldn’t premiere until early 2024.

Before leaving, find out if Thing dies.