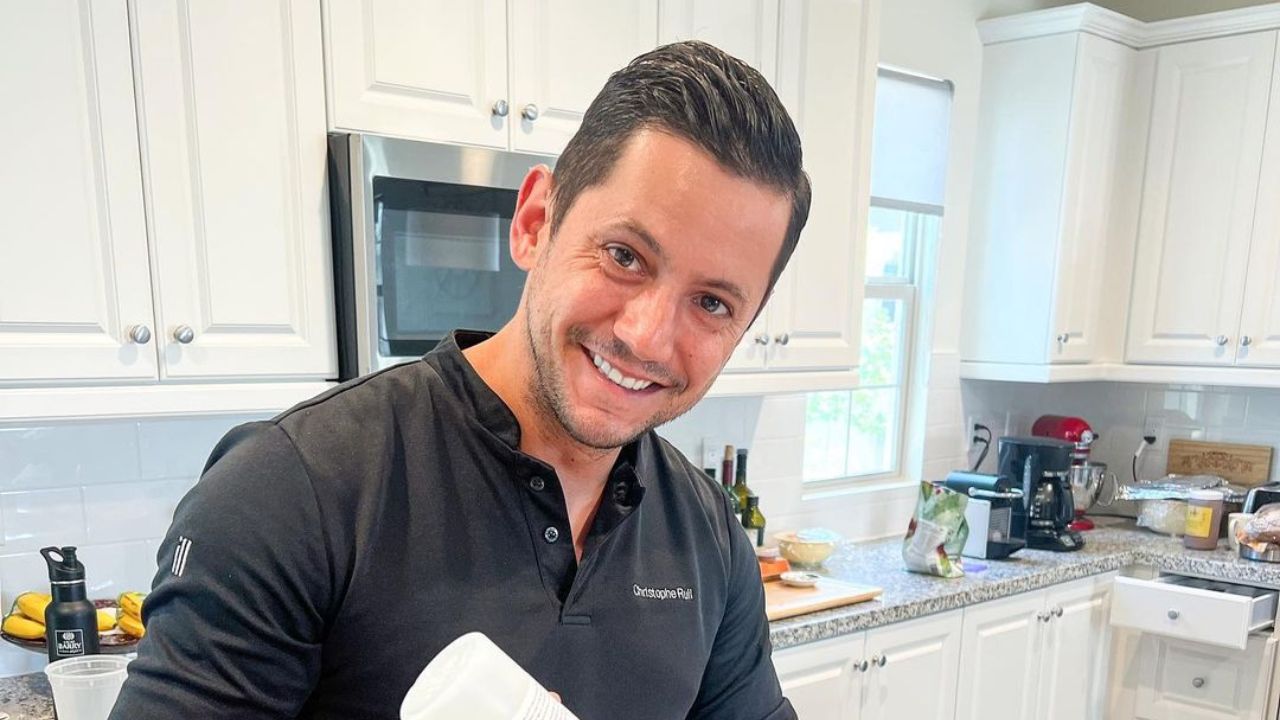 Christophe Rull, one of the cast members of Netflix’s Bake Squad, is a French-born pastry chef with over 20 years of experience, who began his career at the age of 16 in a Michelin-starred restaurant. Additionally, the 38-year-old chef and his now-wife, Wilma Dizon Rull, got engaged in December 2017 and got married in July 2018.

Bake Squad on Netflix, hosted by none other than pastry chef Christina Tosi, founder of the New York-born Milk Bar dessert store empire, is a series in which four talented bakers compete to see whose dessert will be chosen to be a part of someone’s big day. Hand-picked by the successful chef and entrepreneur, the squad consists of Christophe Rull, Gonzo Jimenez, Ashley Holt, and Maya-Camille Broussard, who compete to create some next-level sweets in order to earn bragging rights and spread their professional wings a little further.

Every exceptional creation is not only rich, appealing, and imaginative, but also downright delicious and captures the spirit of the occasion. Likely, Christophe Rull, one of the bakers who was born in France, has worked in the food industry for over two decades. He spent a lot of time in the kitchen as a kid, developing a strong interest in baking and cooking. However, at the age of 15, he was forced to choose between school and work, and he ultimately chose a career in the culinary world.

No doubt, Christophe has gathered a lot of fans, who are interested in knowing more about him. So, if you want to learn more about Christophe Rull with his complete Wikipedia, we’ve got you covered.

Christophe Rull From Bake Squad: The 38-Year-Old Is a Pastry Chef From France With Over 20 Years of Experience; He Is Married to His Wife, Wilma Dizon Rull!

Christophe Rull (@christopherullpro), who was born and raised in Marseille, France, had a difficult childhood before discovering that cooking could provide an outlet. Raised by a single mother in a relatively bad neighborhood with two brothers, the only reason the 38-year-old star didn’t fit in was that his father, a retired cop, was still a part of his life.

He moved in with his father for good at the age of 13, where food became a regular topic of conversation. After all, Christophe used to assist his mother in the kitchen and continued to do so with his father, particularly since they both enjoyed cooking.

After two years, the Bake Squad cast dropped out of regular school to pursue a career in the culinary arts at the age of 15, and he soon found himself working at a Michelin-starred restaurant. From there, he gradually advanced through the levels, gaining unparalleled skill and exposure before embarking on a cross-country tour to teach others about the same.

He even taught at the National Superior School of Pastry in Yssingeaux, France. In late 2009, Christophe seized the opportunity to relocate to the United States and work at the ARIA Resort and MGM Grand Hotel & Casino in Las Vegas.

Later, Christophe Rull left Las Vegas, Nevada, to work as the Executive Pastry Chef at Park Hyatt Aviara Resort Golf Club & Spa in San Diego, California, before getting married to his wife, Wilma Dizon Rull, in Hawaii in 2018 (the couple got engaged in December 2017 and got married in July 2018). Christophe has earned the title of pastry illusionist due to his experience in the luxury food and beverage industry, as well as the techniques and creativity required to succeed.

Furthermore, he has already demonstrated his worth by winning Food Network‘s Halloween Wars in 2017 and Holiday Wars in 2018. He appears to have just wanted to put himself to the test on Bake Squad.

According to our information, the Californian left his position at Park Hyatt in July 2021 to focus on honing his skills at home in preparation for the October semifinals of the upcoming World Chocolate Masters contest in Paris. If he wins, he will represent the country in which he now resides at the event. Christophe hopes to become World Chocolate Master in 2022, especially since no American has ever received the honor. He also recently began teaching at The Pastry Shop by Stéphane. His loving wife, as evidenced by her social media platforms, supports his every career decision.

To be fair, because Bake Squad is produced by the old school, a leading unscripted and reality content provider in the entertainment industry, and features bakers from all over the country, filming took place in Hollywood, Southern California. As the school’s headquarters are in Los Angeles, everyone was invited to attend the production process there.

Los Angeles, also known as The City of Angels, is a sprawling and wondrous city in Southern California that has long been a hub for the US film and television industry. Soundstages are one such supply, and Bake Squad rented one for their use as well. In other words, this show was shot in a controlled, flexible, and truly amazing free space provided by AKS Stages and Rental on Chivers Avenue in Los Angeles’ Sun Valley neighborhood.

AKS Stages meets all of the production’s COVID-19 rules and protocols and has plenty of space to allow for separate work zones for different aspects of a safe shoot. As a result, Bake Squad made full use of the soundstage and everything it has to offer to create a set that is eye-catching, functional, and looks like a proper baking store kitchen.