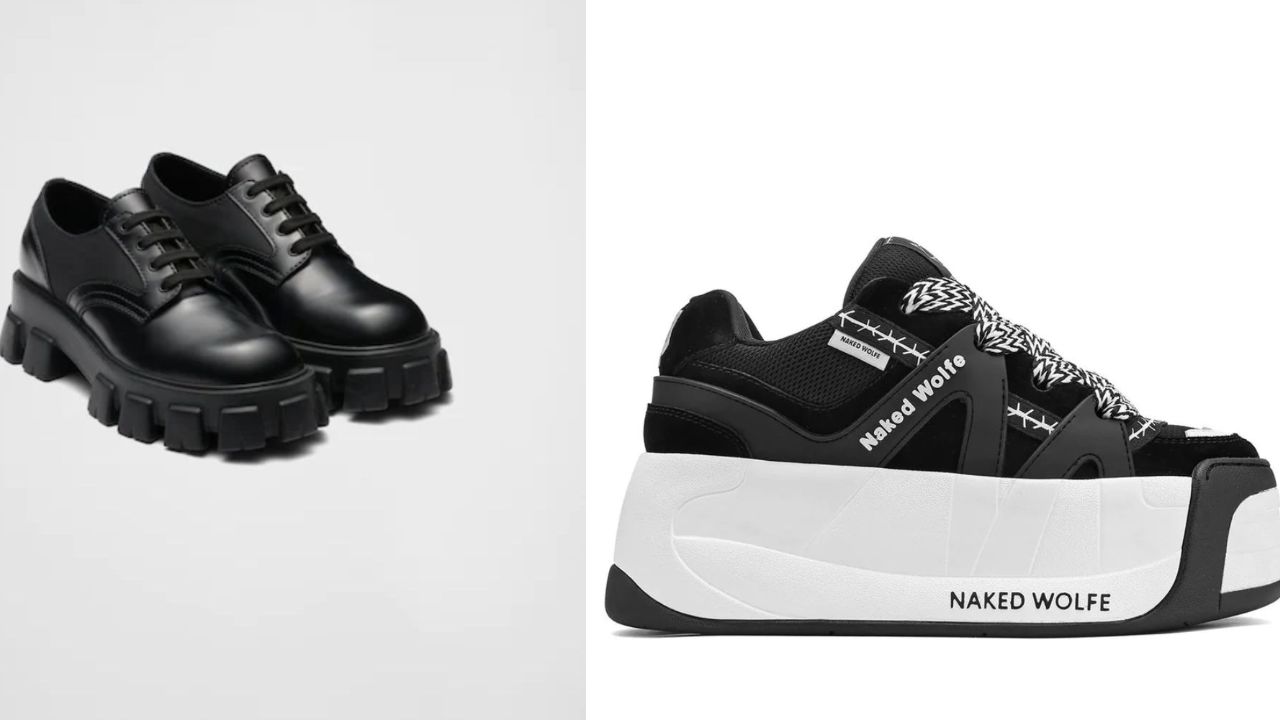 Wednesday Addams’ shoes/sneakers from the Netflix series are currently making headlines as people have been obsessed with them. While Prada’s Black Platform Shoes can be purchased for £920, Naked Wolfe sneakers can be purchased for £168. However, Doc Martens also sell similar shoes ( like Prada) at the price of £159.

Wednesday on Netflix is a new twist on Charles Addams‘ popular cartoon strip The Addams Family. The Jenna Ortega-played title character (Wednesday Addams) is the main focus of the Netflix series, while her family only sometimes makes an appearance.

Jenna mentioned that Billie Eilish was a part of her personal mood board while talking about how she got the idea for Wednesday’s look for the new season from her own personal style.  She stated: “We weren’t making her like every other teenage girl.”

Wednesday stands out from her classmates since she frequently dons big sweaters and sweatshirts as well as numerous pairs of bulky shoes. Additionally, it appears that Wednesday’s outfit is popular with fans since a flood of tweets from people frantic to get their hands on Wednesday’s black platform shoes has been coming in. Fortunately, we did our research and found out the exact shows which people have been seeking. Well, here’s everything we know.

Also, find out about Sirens.

Throughout the series, Wednesday Addams wears multiple unique outfits and shoes which actually fit her personality in the series as well. However, her two sneakers, especially Black Platform and Naked Wolfe shoes. Lucky for you, we found the exact pair of shoes as well as where you can buy them.

Talking about the black platform shoes, we see Wednesday wearing her customized black and grey striped Nevermore Academy uniform throughout the series. She wears a pair of bulky black lace-up shoes in addition to her uniform. Jenna Ortega looks to be wearing the same pair of Prada‘s Monolith brushed leather lace-up shoes as Wednesday’s school uniform. Unfortunately, the cost of those same shoes is a whopping £920.

However, there are many dupes at other brands that are considerably less expensive. Even better, ASOS has a variety of hefty, black, lace-up shoes that could easily pass for Wednesday’s Prada shoes for casual wear. Or your Halloween attire for next year. A similar bulky design is also offered by Doc Martens for £159.

Another pair of shoes worn by Wednesday during the show, her platform Naked Wolfe trainers, have also been noticed by the viewers. These shoes may be seen in the first episode when Wednesday is customizing the portion of her dorm room that she shares with Enid Sinclair. In the upcoming episodes, Wednesday is occasionally seen wearing them when she is not donning her school uniform. The Naked Wolfe Slider Black sneakers are the ones in question, and they are presently on sale for £168.

With advice from Jenna and filmmaker Tim Burton, renowned costume designer Colleen Atwood created Wednesday’s outfits. In an interview with Harper’s Bazaar, Atwood spoke about Wednesday’s Rave’N dance dress and disclosed that neither it nor the show’s version of it was made specifically for the series. She actually discovered the garment on a mannequin in a Bond Street boutique in London.

The Real Laurel Gates in the Series: Who Was It?

Sheriff Galpin‘s decision not to file kidnapping charges on Wednesday came with the “quid-pro-woe” that she would be kicked out of Nevermore. Professor Thornhill, played by Christina Ricci, stops Wednesday Addams before she leaves and presents her with a white oleander plant as a token of hope and rejuvenation.

Thornhill argues that although Wednesday may be mysterious, she is incredibly gifted and has a promising future. Will the rest of the community recognize Wednesday’s potential, though? Ah well, this was just the genuine Laurel Gates trying to confuse Wednesday even more. That is correct! The true Laurel was Thornhill, not Kinbott, and she utilized a plant-based drug to win Tyler onto her cause so she could manipulate him.

When Eugene awakens from his attack and tells Wednesday that he recalls someone setting fire to Hyde’s cave wearing red boots—which Wednesday immediately identifies as Thornhill’s characteristic footwear—she solves the case. Principal Weems joins forces with Wednesday and transforms into Tyler while doing so.

Thornhill confidently shared her future ideas with Wednesday, but when it became clear that Weems was in the room rather than Tyler, it immediately sapped all the vitality out of the room (much like Uncle Fester‘s fingertips). Thornhill injects Weems with a fatal poison to murder her, then knocks Wednesday out, causing her to wake up in shackles in the crypt.