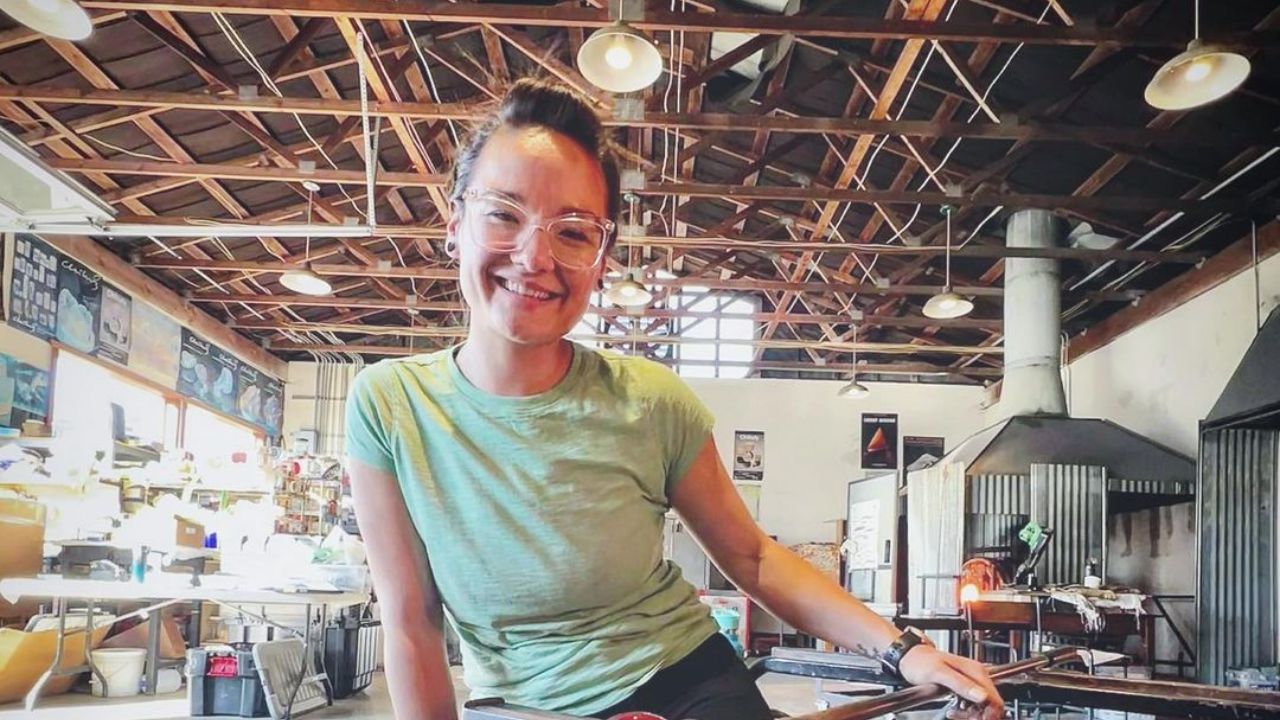 Minhi Su England from Blown Away season 3 is a contestant and a glass artist. After high school at Pilchuck Glass School, she went on to pursue a Bachelor of Fine Arts degree in glassblowing, metal casting, and art history. She was married to Jesse, but unfortunately, he passed away. Go through the article to learn more about Minhi Glass Blower, find out how her husband died, and meet her on Instagram.

Season 3 of Blown Away premiered on Netflix on Friday, July 22, 2022. In the show, 10 new glassblowing contestants compete for a $60,000 cash prize and a position in an artist residency at the Corning Museum of Glass in New York.

The concept is simple: several glassblowers come together in a huge workshop, or hot shop in glass-blowing slang, and create glass art in response to specific issues. The drama is created by the time restraints and difficulties, as well as the fact that these artists are sculpting delicate glass while working in temperatures that climb between 1600 and 2000 degrees Fahrenheit. This is similar to a glass art version.

Blown Away Season 3 of the Netflix glassblowing competition series has new artists, judges, and challenges. And now viewers wonder about one of the cast members, Minhi Su England. Well, here is what we know so far!

Previously, we touched on Grace Whiteside, Nick Uhas, Rob Stern, and Deborah Czeresko (plus her partner).

Minhi Su England From Blown Away Season 3: Meet the Contestant on Instagram and Also Find Out How Her Husband Died!

With stunning sights, a touching edit, a brief running time of 30 minutes, and plenty of footage of scissors cutting through molten glass, The third season of the show Blown Away is everything you could want. And as usual, the Netflix reality competition series brings you a new group of glassblowers you’ll adore getting to know over the season (well, for as long as they remain in the competition).

They have a difficult road ahead of them since they have to prevail against Katherine Gray (@katherinegray), the head judge, and all of the visiting specialists. However, a greater prize awaits. They included Minhi Su England, a participant who is exceptionally gifted, imaginative, and determined, in season 3.

Glass artist Su England resides in Seattle, Washington. Minhi, a half-Korean native of New York State, is said to have fallen in love with glass and metal while growing up near the beautiful yet little town of Carthage. It appears that this is what motivated her to enroll at Alfred University (2006–2010) immediately after high school to pursue a Bachelor of Fine Arts degree in glassblowing, metal casting, and art history.

From there, the developing artist began taking jobs as a teacher or blower before running into her beloved Jesse in 2012 while she was studying at the prestigious Pilchuck Glass School in Washington, DC. The pair got married in the year 2020 after dating for several years.

But sadly, Jesse passed away from cancer right in front of her after nine incredibly joyful years of them not just being together but also co-creating together. He was only 37 years old and it was May 10, 2021, almost eight months after their lovely, pandemic wedding in the woods on September 20, 2020.

The loss of her devoted, encouraging husband surely turned her entire world upside down, but it’s clear that Minhi has now managed to transform her sorrow into a motivation to get better at everything she does.

And finally, she ended up on the show Blown Away, where she used her own experiences to think creatively, design unmatched glass creations, and ultimately placed second. It was Jesse’s encouraging voice in her brain that kept her going since she knew he would never want her to give up, even if her trip had not been easy in any way, shape, or form.

After the findings were revealed, she commented in the reality series that she had learned that the fight was real. A contestant in season 3 is Minhi. However, tragically, she couldn’t make it to the win, and John Moran ended up winning the competition.

The Seattle-based personality continues to handle production for Artful Ashes, teaches at Pratt Fine Arts Center (where she previously collaborated with Jesse), and co-founded a studio. With her close friend Bri Chesler, she founded Liquid Lush Studio, which primarily serves as her go-to space where she can express all of her creativity without boundaries. The two friends create unusual but beautiful glass blowing that can be purchased as gifts.

Furthermore, it appears that Minhi Su England is getting ready to build her own publicly accessible website, indicating that she has big plans to spread her metaphorical wings even further. She later created a heart-shaped necklace with Jesse’s ashes inside it, utilizing the Artful Ashes concept of turning a loved one’s embers into glass pieces.

Regarding her online presence, Minhi uses the handle (@m.i.n.h.i) on Instagram, where she has amassed over 4K followers and describes herself as a young widow.