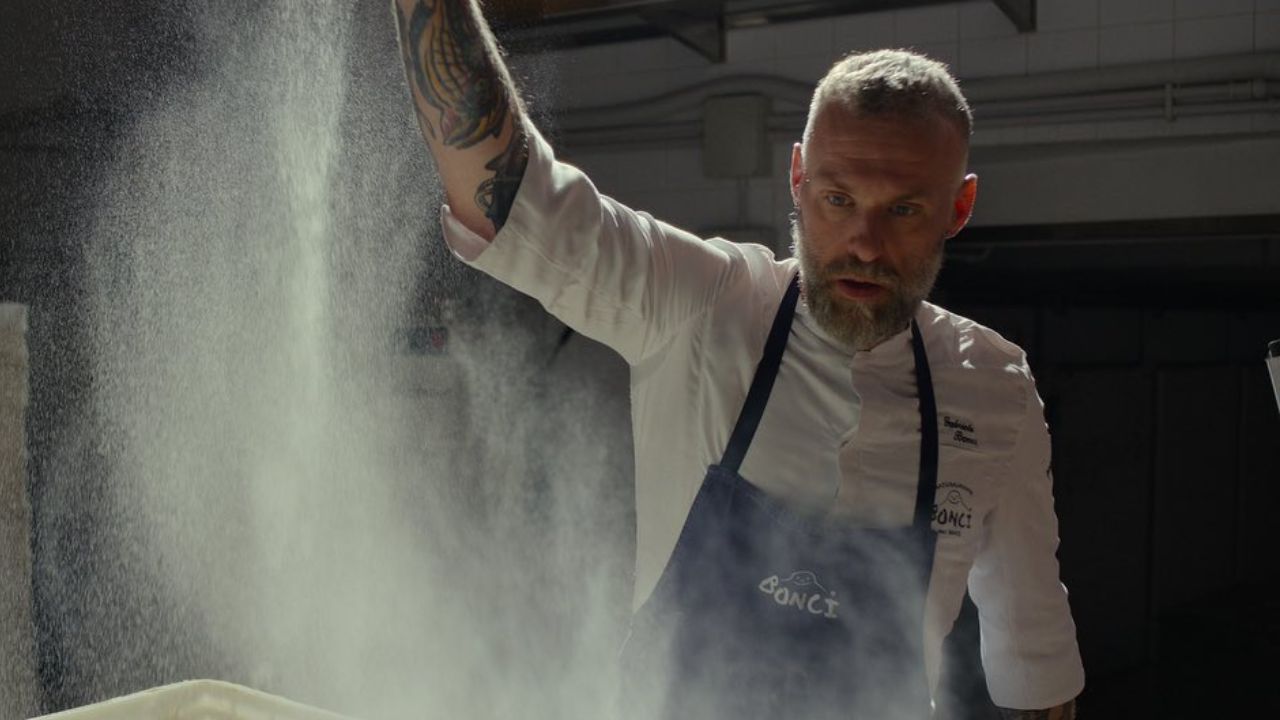 Gabriele Bonci From Netflix’s Chef’s Table: Pizza is an Italian chef and television personality who has yet to be featured on Wikipedia. Bonci was born on March 24, 1977, and is 45 years old as of 2022. Regarding his height and net worth, there is no trustworthy information. Many people have speculated that Gabriele Bonci is married and has a family with his wife, but neither of these assumptions has been supported by any evidence. He has many pizzerias in different locations, including Chicago and Miami, with different recipe menus.

As you might have guessed from the title, Chef’s Table: Pizza on Netflix is a spin-off of Chef’s Table and is a documentary series that explores the world of pizza. Six top chefs from around the world who see the art of cooking pizza are revealed in the show.

These well-known chefs prepare each slice of their pizza with passion, creativity, hard work, and conviction, using their distinctive techniques and flavors. The series not only focuses on the food but also gives viewers a look into the private lives of the chefs that are showcased, which enhances the overall enjoyment.

Chef Gabriele Bonci is renowned for his distinctive dough, superb taste, and extraordinarily fresh ingredients. As a result, fans are understandably interested in learning more about Gabriele, and we are here to satisfy their curiosity!

Previously, we touched on Chris Bianco and Ann Kim.

Gabriele Bonci From Netflix’s Chef’s Table: Pizza, Is an Italian Chef and Television Personality Who Has Yet to Be Featured on Wikipedia!

Gabriele Bonci (@bonci_gabriele), from Netflix’s show Chef’s Table: Pizza, is an Italian chef and television personality who has yet to be featured on Wikipedia. His celebrity unavoidably followed him to the US, and soon customers were in line to buy a Bonci pizza outside the Chicago location.

Gabriele was born on March 24, 1977, and is 45 years old as of  2022. Regarding his height, and weight there is no trustworthy information. At a young age, Gabriele found his love of cooking in Rome, Italy. So, after finishing his education, he started training to become a chef.

However, Gabriele concluded over time that he preferred preparing bread and pizzas to careful restaurant cooking. Gabriele Bonci used his skills to build his main restaurant, Pizzarium, in the Italian capital after working at several restaurants in Rome. The pizza, which is located in Rome’s Via Della Meloria, quickly gained popularity and soon had lines of people waiting outside for a piece.

Gabriele utilizes a specific kind of historical stone-ground flour that retains the taste and flavor of his pizzas in addition to the greatest and freshest ingredients. It’s interesting to note that because he appeared in the 2011 TV documentary The Layover, he is highly recognized on Italian television in addition to being a skilled restaurant owner who has won numerous awards to date.

The chef has also made appearances on the television program Pizza Hero and served as a judge on the Italian reality competition Bake Off Italia-Dolci. Sources claim that Gabriele Bonci makes over a thousand new pizza recipes each year and offers a variety of pizza flavors in his eateries.

A few of the tastes are so rare that they are only offered once a year. Naturally, his significant contribution to pizza has garnered him praise from critics, and his masterpieces are considered some of the best in the world. Gabriele ultimately decided to go out and launch a location of his pizzeria in Chicago in 2017 after becoming wildly successful in Rome and throughout all of Italy.

His celebrity unavoidably followed him to the US, and soon customers were in line to buy a Bonci pizza outside the Chicago location. Gabriele Bonci continued to develop in Miami in 2021 since the business was booming at the time, and he was eager to introduce his innovations to the coastal city.

Gabriele appears to live in Rome at the moment but spends time in Miami, Chicago, and his birthplace. In addition to currently owning three pizzerias, he also launched a bakery in partnership with Rome-based chef Roberta Pezzella. The fact that Gabriele insists on every ingredient being identical helps to preserve quality even though his pizzerias in the US are quite a distance from his flagship location in Rome.

Many people have speculated that Gabriele Bonci is married and has a family with his wife, but there is no evidence to support either of these assumptions. The celebrity chef has been effective in keeping quiet about his life outside of his pizzerias, despite the years when he has been the focus of intense media scrutiny.

Given his fame and a fruitful professional career, Gabriele Bonci surely made a fair sum of money during his career. His net worth hasn’t yet been made public, though.