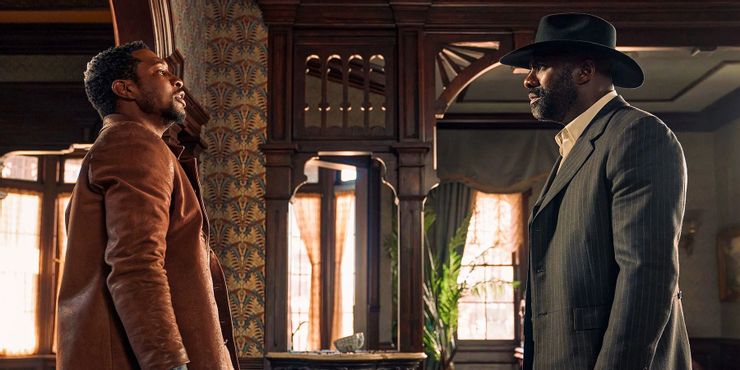 Fans wonder if Rufus Buck and Nat Love are brothers on Netflix’s The Harder They Fall. Get to know the Rufus Buck gang and the Nat Love gang.

The Harder They Fall is a modernized western that chronicles Nat Love on his quest to redeem his parents’ deaths. After witnessing their violent execution by a known bandit, Nat commits a “righteous crime” and starts stealing from criminals.

His group believes our hero’s complex sense of justice and even joins him in combat against the infamous Rufus Buck, who is shown to be culpable for Nat’s parents’ deaths.

The compelling story doesn’t end there, and the movie’s climactic clash has a shock that leaves Nat shattered when he discovers that the vile Rufus is actually his brother. Could this be true? Let’s get started and find out!

Who Was The Nat Love Gang? Did They Really Exist?

The Nat Love Gang is known in the movie for robbing criminals but never harming innocent individuals or banks.

Bill Pickett, the group’s titular chief, is joined by Jim Beckworth, longtime comrade Mary Fields, and Cuffee, who only enters the group when they battle Rufus Buck.

In truth, the Nat Love Gang did not exist. Nat Love, on the other hand, was born in June 1854 to captive parents on Robert Love’s farm in Davidson County, Tennessee.

Nat’s rep as a horse instructor gave him sufficient cash by the time he was 16 to quit the estate and head west. He supposedly won a number of rodeos and got the moniker “Deadwood Dick” at one time.

Nat even authored a memoir titled The Life and Adventures of Nat Love, which was first printed in 1907 and is still the basis of much of his material.

Were Nat Love and Rufus Buck Brothers? The Ending Suggests So!

The culminating fight in The Harder They Fall is underscored by the startling discovery that Rufus Buck and Nat Love are siblings.

Their daddy, a drunkard who tortured Rufus as a kid, subsequently murdered Rufus’ mom and deserted the little boy. He subsequently changed his ways and married the lady who bore Nat.

When Rufus eventually finds his father, he murders him and his second wife (Nat’s mother) as a form of retaliation, as seen in the movie’s opening moments.

As a result, Nat grows into adulthood aware that Rufus murdered his parents but is uninformed that they are kin. When Rufus ultimately tells Nat this, he continually refers to him as Nathaniel Buck, arguing that this is his actual name.

Therefore, it is assumed that their father’s surname was originally Buck, which he later renamed Love prior to exchanging vows with Nat’s mother.

Despite the fact that both Nat Love and Rufus Buck are based on real-life people, their stories are vastly different.

Although Nat Love and Rufus Buck were operating around the same time, they most likely never bumped into each other and were not siblings.

The movie also presents Rufus as being considerably older than Nat, despite the fact that the latter was clearly significantly older. Most strikingly, there is no evidence that Rufus murdered the real Nat’s folks.