Heather Rae Young is a renowned realtor from Los Angeles. Heather’s rise to fame started following her stint on Netlfix’s docusoap, “Selling Sunset.” The boss lady, real estate agent, has become a household name following her appearance on the show.

As we all know, Heather Rae Young is known for selling some of the most luxurious mansions in LA; no doubt, she is making millions for herself.

Born in Anaheim, California, Heather made headlines when people found out she is dating Christina Anstead‘s ex, Tarek El Mousa. Tarek, just like his SO, is a real estate agent and television personality known for HGTV’s multiple shows.

Heather Rae Young, apart from being a glorious realtor and television personality, has worked as a model as well.  Here are all details of Heather you should definitely check out.

Heather was born in Anaheim, California, and raised in the San Bernardino Mountains. From her early age, Heather worked as a server at a local pizza place and later served as a ticket checker at the Snow Valley Resort.

Career as a Model

While talking about her modeling career, Heather Rae Young attended a Playboy casting call in 2008 and was called back for some test photos the following year. In 2010, Young was selected to be the Playmate model for the famous men’s magazine. Later, she worked as a swimsuit, lingerie, and glamour model. Moreover, Heather has been a spoke model for Captain Morgan, Jose Cuervo, and many more.

Heather Rae Young is a huge fan of tattoos. According to some reports, Heather had almost 20 tattoos but later removed them. Young now has only six tattoos left; one of them is an amazing tattoo collection on her wrist that includes a small paw print, a musical note, and a number.

Back in 2014, Heather tweeted out that she removed 14 tattoos. In her tweet, she wrote, #14 tattoo removal today. Eye on the prize should only be about 4-5 more. Think before u get big color tattoos. 🙈”

Heather Rae Young and Tarek El-Mousa are still mum about their wedding day; however, they have set everything up. According to the reports, Heather’s wedding dress will be designed by Galia Lahav; according to her Instagram post, Kristi Lee of Details Details will plan her wedding, and the wedding is likely to be held in California or Italy.

Heather Rae Young and Tarek El Moussa started dating back in July 2019, and the Flipping 101 star proposed to his gal a year after into their relationship, on the beach three days after their first anniversary.

Heather Rae Young flaunted her engagement ring on her Instagram post and still keeps flaunting it on her social media. By what it seems, the ring seems at least worth thousands of dollars.

According to some reports, Heather Rae Young has an estimated net worth of $3 million.

For more updates on your favorite celebrities’ profiles, stay tuned to Blurred Reality. 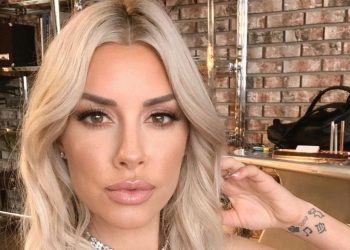