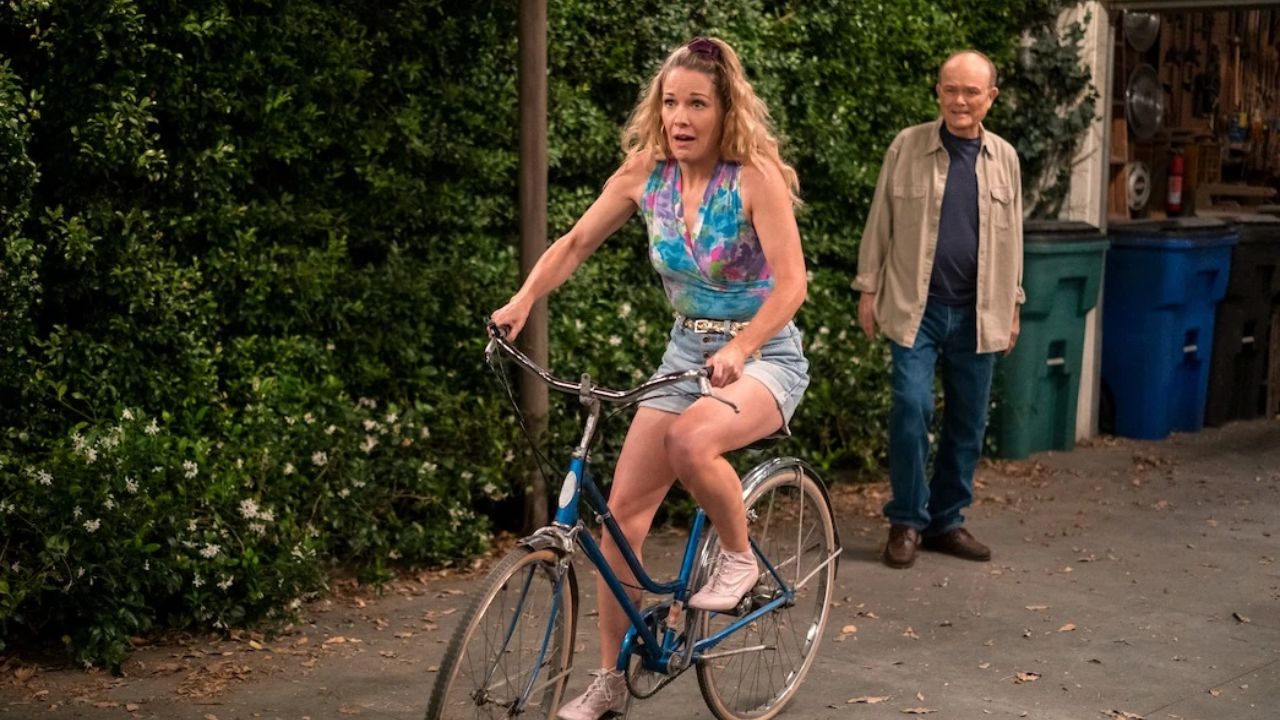 The role of Sherri Runck, neighbor Gwen’s mom, is played by actress Andrea Anders in Netflix’s That ’90s Show. The 47-year-old actress is renowned for her role in Better Off Ted, Mr. Sunshine, and the Friends spin-off Joey.

A new generation of teenagers who live in basements in Point Place, Wisconsin, is introduced in Netflix‘s That ’90s Show, a spinoff of the popular comedy That ’70s Show from the early 2000s. When Leia Forman (Callie Haverda) visits her grandparents for the Fourth of July, she quickly makes new friends who push her to stay in Point Place for the summer, missing out on Space Camp much to her father’s chagrin.

The events of the show take place in July 1995, almost 15 years after the events of the ’70s Show series finale. Like the original series, the first episode introduces us to a motley crew of youngsters. Leia is an uncomfortable geek who has been invisible for much of her life until her neighbor Gwen (Ashley Aufderheide), a cool girl with a radical gang of friends, makes her feel seen.

Sherri Runck, who is Gwen’s invasive mom in the series, has won the hearts of many viewers with her performance. As a result, many of the viewers have been curious to know about the actress who plays the role of Sherri. Well, we’ve got you covered.

The Sherri Runck Actress From That ‘90s Show: The Role of Gwen’s Mom Is Played by Andrea Anders!

The role of Sherri Runck is played by actress, Andrea Anders. You may have seen her in sitcoms like Better Off Ted, Mr. Sunshine, and the Friends spin-off Joey (she was previously in a relationship with Matt LeBlanc for eight years). She has also been on TV programs including Ted Lasso, Young Sheldon, and Modern Family.

The 47-year-old actress has also appeared in a number of movies directed by her brother, Sean Anders, including the Christmas feature Spirited in 2022 and the teen comedy Sex Drive from 2008.

Meanwhile, Sherri is the mother of half-siblings Gwen and Nate (Maxwell Acee Donovan). She is a struggling single mother who lacks direction and frequently seeks advice from Kitty and Red. Sherri initially appears in Episode 2, titled Free Leia.  She tries to apologize to whoever it was who shouted at her kids by knocking on the Formans’ door (it was Red, obviously).

Sherri pops a drink, tells Kitty and Red that her shower head is broken, asks to borrow their microwave, and spills the beans about her ongoing love life. All of this occurs at their initial meeting. It doesn’t take long for viewers to get Sherri’s perspective. She needs a little help gaining her boundaries because she is flighty, brash, unpredictable, and tacky (we’re not judging!). None of us do.

In the end, Sherri determines that she’s dating this “clingy” mystery guy incorrectly despite her mixed emotions about her blossoming romance. In Episode 2, Kitty counsels her to put herself first and “take a break from the fellas.” Funny enough, viewers later learn that Sherri’s mystery is none other than Wilmer Valderrama‘s original character Fez, who now runs a chain of hair shops. And after giving it some thinking, Sherri decides to try again with Fez. In episode 10, it is revealed that Fenton (Jim Rash), Fez’s nemesis, is Sherri’s stubborn landlord.

Actress Andrea said in an interview with Pride that she is from Wisconsin, which allowed her to relate to Sherri on a deeper level. “I’m from Wisconsin, I know this person,” she remarked in reference to Sherri’s personality. Andrea continued by saying that Sherri’s unusual accent is actually how she speaks. She added,

I worked for years to kill that accent, and now I feel like I’m free again!

That ‘90S Show Season 2 Update: Has It Been Renewed for the Second Season?

That ’90s Show‘s renewal hasn’t yet been announced by Netflix as of this writing. The following month will be important since viewing numbers and other criteria will determine the series’ future, and the show has only recently premiered on the platform.

We’ll have a general notion of whether or not That ’90s Show will be renewed after we get viewership data. Of course, it’s important to remember that Netflix’s recent history with comedy programs hasn’t exactly been stellar. Since May 2021, only Wednesday and Mo have been renewed from the slate; both renewals occurred in January 2023.