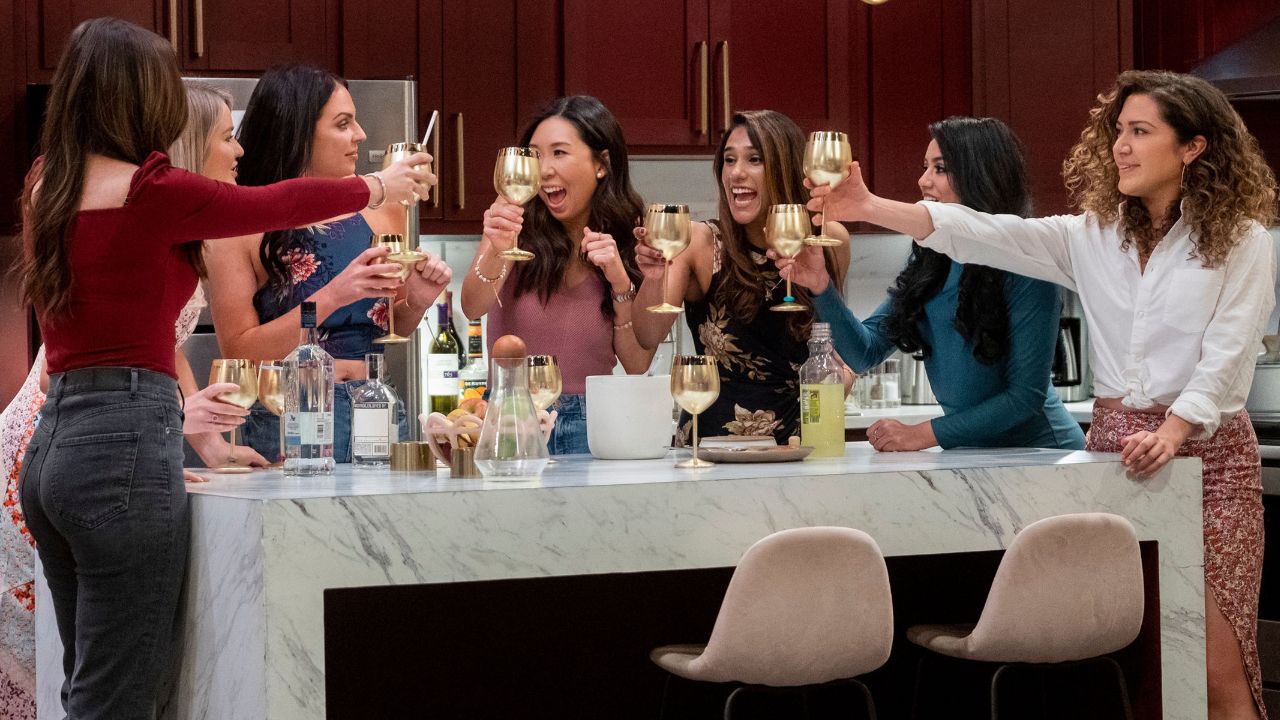 Love is Blind Season 2 cast members and their respective Instagram, ages, zodiac signs, and birthdays is the latest curiosity amongst fans and Reddit users alike. The first five episodes of Love is Blind Season 2 premiered on Netflix on February 11, 2022. The reality dating show follows 15 single men and 15 single women from Chicago as they blind date, get engaged without ever seeing them, and decide whether to get married or not at the altar. The series is hosted by Nick and Vanessa Lachey.

It’s Valentines’ season (and Love is Blind is back on Netflix)! Your mind must be filled with thoughts about love. You are either thinking about love – how it’s the most precious gift bestowed upon humanity that makes their lives timeless or how it’s an emotion-masquerading illusion that mere mortals created and then leveraged to consider themselves of some substance in their limited existence, or somewhere in between.

Either way, you must have seen that ‘Love is Blind.’ The reality show has returned with the second season. So, if you are single, take notes on what to say or what not to say when you are not relying on your looks. If you are not, cuddle up with your partner and take notes anyway because nothing lasts forever.

The first five episodes of the dating show are available for streaming from February 11, the next four episodes will drop on February 18, and the season finale will premiere on February 25.

Previously, we looked at the relationship status of Shaina and Shayne, Mallory and Sal, Nick and Danielle, Deepti and Shake, Shaina and Kyle, and Shayne and Natalie.

Love is Blind Season 2 is hosted by a celebrity couple Nick and Vanessa Lachey. The dating show documents 30 singles blind dating with the aim of getting engaged without ever laying eyes on their partner.

All 15 men and 15 women, based in Chicago, are bringing chaos and drama, and entertainment. Let’s take a look at the cast members of the second season of the reality series.

Abhishek ‘Shake’ Chatterjee (@thepuppydoc) is a 33-year-old who goes by ‘Shake’. He is a veterinarian who also occasionally does house-DJing but he works much more than just that.

According to his Instagram bio, the Love is Blind Season 2 star helps humans achieve (self) love and success through guidance, healing, & accountability.

Brandon McGhee (@classik_blk), 36, helps people get the best insurance policy suited to them. He is also a fitness freak that has helped his body with the abs which he often displays on his Instagram.

The Love is Blind Season 2 star is on the lookout for a woman who can match his zeal for fitness.

Brian Ngo (@brianqngo), 32, is a lot of things. Brian is the son of Vietnam War refugees who settled in a small rural community on Missouri’s vast plain.

Professionally, the Love is Blind Season 2 alum is an advertising strategist and a Marine Veteran. He is also a doctor of psychology and a professor. Personality-wise, he is a self-admitted jokester who is extremely outgoing and loud.

Haseeb Hussain (@haseebhusn) is a lawyer who’s into sneakers and is always spending all of his money on new sneakers. The 28-year-old is a massive hockey fan.

The lawyer suspects that he might get hurt in the dating game which is his biggest fear as one of the guys in the pod on Love is Blind Season 2.

James ‘Joey’ Miller (@millerj5001) is a 30-year-old business strategy consultant. When he is not busy developing strategies to minimize the risks in the business he works for, he participates in mildly dangerous adventures like bungee jumping, scuba diving, quad biking.

The Love is Blind Season 2 alum says that he is going to try to make the love of his life smile every day for the rest of her life.

Jarrette Jones (@thejjones_05) is a 32-year-old lad with his finger in every pie. He is a project manager and an investor. He is also a sneaker dealer and a podcast host.

Not only that but he is also an investor and a barber. The Love is Blind Season 2 star thinks that he is a looker in a humble way and hopes that his future wife agrees with him.

Jason Beaumont (@travel.with.jb) is a flight attendant on United Airlines. The 31-year-old is uncompromising when it comes to cleanliness.

The Love is Blind Season 2 star is a keen traveler who wants to find a woman he can travel the world with. He is always going to be there for the person he falls for no matter what.

Jeremy Hartwell (@jjhrtwll) is a 36-year-old director and an entrepreneur. He mentions in his Instagram bio that he is into fitness, sports, and snowboarding. He also loves philosophy and self-improvement.

Having signed up for Love is Blind Season 2 so that he didn’t have to think about what to do and just be himself, he is excited about subverting his own expectations about what dating is.

Julius Cacho (@orngejulius) is a logistics manager at 39. Going by his Instagram handle that is currently private, he seems to be a little secret-y.

The Love is Blind Season 2 alum is excited to get to know more about his blind date and if there is a possibility of a future.

Kyle Abrams (@kyleabrams10) is a 29-year-old glazier who loves water sports. His biggest turn-off is a negative pessimistic attitude.

The Love is Blind Season 2 star is looking for someone who can cheer him and make him laugh.

Nick Thompson (@nthompson513) is a vice president of brand and product marketing.

The 36-year-old is a neat freak who is looking forward to getting rid of all the distractions of the real world and just really honing in and thinking about the people he is engaging with and truly getting to know them.

Rocky Smith (@rocky_nobullwinkle) is a 30-year-old executive. He loves to travel and go skiing.

The Love is Blind Season 2 star says that he has a lot of love to give and that his love is very deep.

Salvador Perez (@salvadior08) works as an executive assistant. The 31-year-old is a musically inclined person who sometimes leaves his dirty dishes out.

Taking a look at his Instagram profile, The Love is Blind Season 2 alum seems to be the life of the party. He is hoping to find a best friend with whom he could share experiences.

Shayne Jensen (@shaynejansen) is a real estate broker at 32. He is expecting to learn a lot about himself during Love is Blind Season 2 while finding his future wife.

He is an appreciator of punctuality in a person.

Vito Salamone (@vito823) is an owner of a pizzeria at 33 whose biggest pet peeve is being rude to waitstaff at eateries.

The Love is Blind Season 2 alum has a beautiful puppy Linguini for a pet.

Aja Johnson (@aja.mj) is a 28-year-old paralegal who knows how to put together an outfit to serve the looks she models on Instagram. She also dances like nobody’s watching that gets everybody watching.

She believes that she will find her love in Love is Blind Season 2. Bad communication could be her deal-breaker.

Caitlin McKee (@caitlinmckee) is a 31-year-old who works in medical software sales. She finds dating in this generation hard and has tried a lot of things to find the one.

Love is Blind Season 2 is her latest try at it. She looks very sweet and finds rudeness unbearable.

Chassidy Mickale, 34, (@chassidymickale) owns Your Image Matters LLC, a beauty and image brand. She serves as a makeup artist, hairstylist, and image consultant.

Having perfected the art of glamming up, The Love is Blind Season 2 alum has refined her Instagram handle and is very neat, and doesn’t understand messy eaters.

But she has bad sinuses and ‘hus-bae’ is going to have to get with the program because that’s what happens.

Danielle Ruhl (@dnellruhl) is a 29-year-old associate director of marketing. Insecure about the way she looks, she was worried that her personality might not be enough.

No matter how insecure, The Love is Blind Season 2 star is very self-loving as she shares  Michael Scott‘s sentiment when he says ‘I want people to be afraid of how much they love me.’

Deepti Vempati (@lifewithdeeps) works as an information data analyst. The 31-year-old describes herself as a product of two cultures intertwined into one soul.

Even though she is scared about being vulnerable or being steered in the wrong direction in the pods, The Love is Blind Season 2 star is ready to find a man to light up his life because her name literally means light.

Hope Alicia (@hopeant) is a 32-year-old sales manager. She considers someone who likes to travel, try new restaurants and go on adventures as her ideal match.

The Love is Blind Season 2 alum is looking for someone who takes her for who she is and doesn’t try to change her.

The 27-year-old is the youngest cast member who believes it likely that her goofiness could be a turn-off for some people who thinks that it is childish.

Juhie Faheem, 31, (@juhiefaheem) works as a clinical therapist. She is hoping to find someone with drive, someone who is very kind and down to have an adventure with her.

The Love is Blind Season 2 star loves dancing and she is also a lover of faith, family, and friends.

Kara Williams (@kara_williams) is a 32-year-old client service manager. She is an animal lover whose love language is food.

The Love is Blind Season 2 star has always been extreme in her past relationships by letting people in too much or not enough. You can’t go backpacking with her as she overpacks.

The Love is Blind Season 2 star and her German Shepherd Rosie is a package deal so, she needs someone who likes big dogs.

Natalie Lee (@natalieminalee) is a consulting manager. The 29-year-old, as per her Instagram bio, is the owner of all bad jokes and awkward comments. She is also a victim of awkward situations as she has irritable bowel syndrome (IBS).

The Love is Blind Season 2 alum hopes that the love of her life will still be willing to marry her. She finds men name-dropping and showing off lame and distasteful.

A man who loves dish-washing could complement her in that she is not a fan of doing the dishes and straightforwardly says that her future partner would have to take over that chore.

The Love is Blind format is perfect for her as she wants a soul connection rather than a relationship based on outer appearance. All she looks for in a man is complete honesty.

Shea’na Grigsby (@bobby_grigs)is an event partnership director. The 36-year-old is a three-sport athlete and a winner of eight National Championships and 17 All-American Awards during her four years at Carthage College.

Her three sports are volleyball, indoor and outdoor track, and field. Someone who doesn’t align their action with their words is her biggest pet peeve.

Trisha Frame is a real estate broker. The 30-year-old is excited about being open-minded and seeing a different change in herself.